Occupying pride of place in my record collection are the four studio albums released between 1980 and 1984, by 'New Wave' band Ultravox. Frequently, music from one's childhood and early adulthood dates, ferociously, and other than evoking certain sentimental memories, rarely stands up to sustained listening. In my case, Ultravox perseveres.

Let me take you on an album by album tour of Ultravox, picking out the highlights, and illustrating why I believe they're well worth exploring in detail. 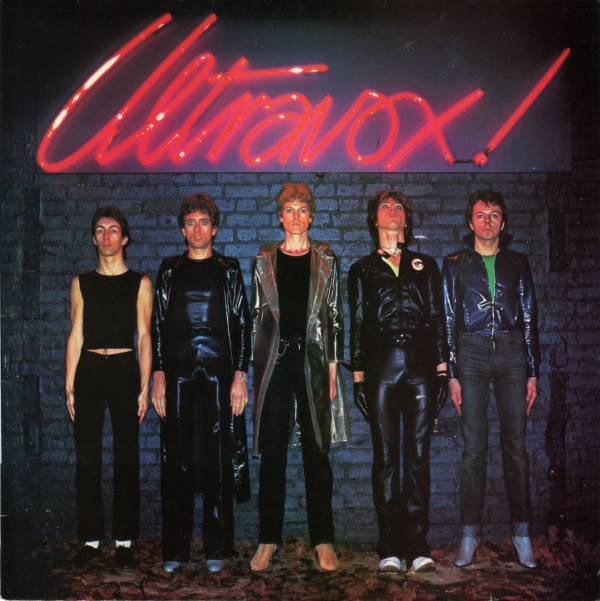 Their debut album, Ultravox! (1977), produced by Brian Eno, actually represents three years of output, and as such is somewhat out of sync with the contemporaneous releases by The Damned, The Stranglers and The Clash, although in essence emerging from the same club circuit. Slip Away is Roxy Music-esque. I Want to be a Machine could have been a Bowie track. The Wild, The Beautiful & The Damned is the stand out track for me for its violin usage, courtesy of Billy Currie, and excellent guitar work.

Purely as a snapshot in time, and a chronicle of the emergence of punk and new wave, this is a must-listen album. Musically it stands on its own two feet too. 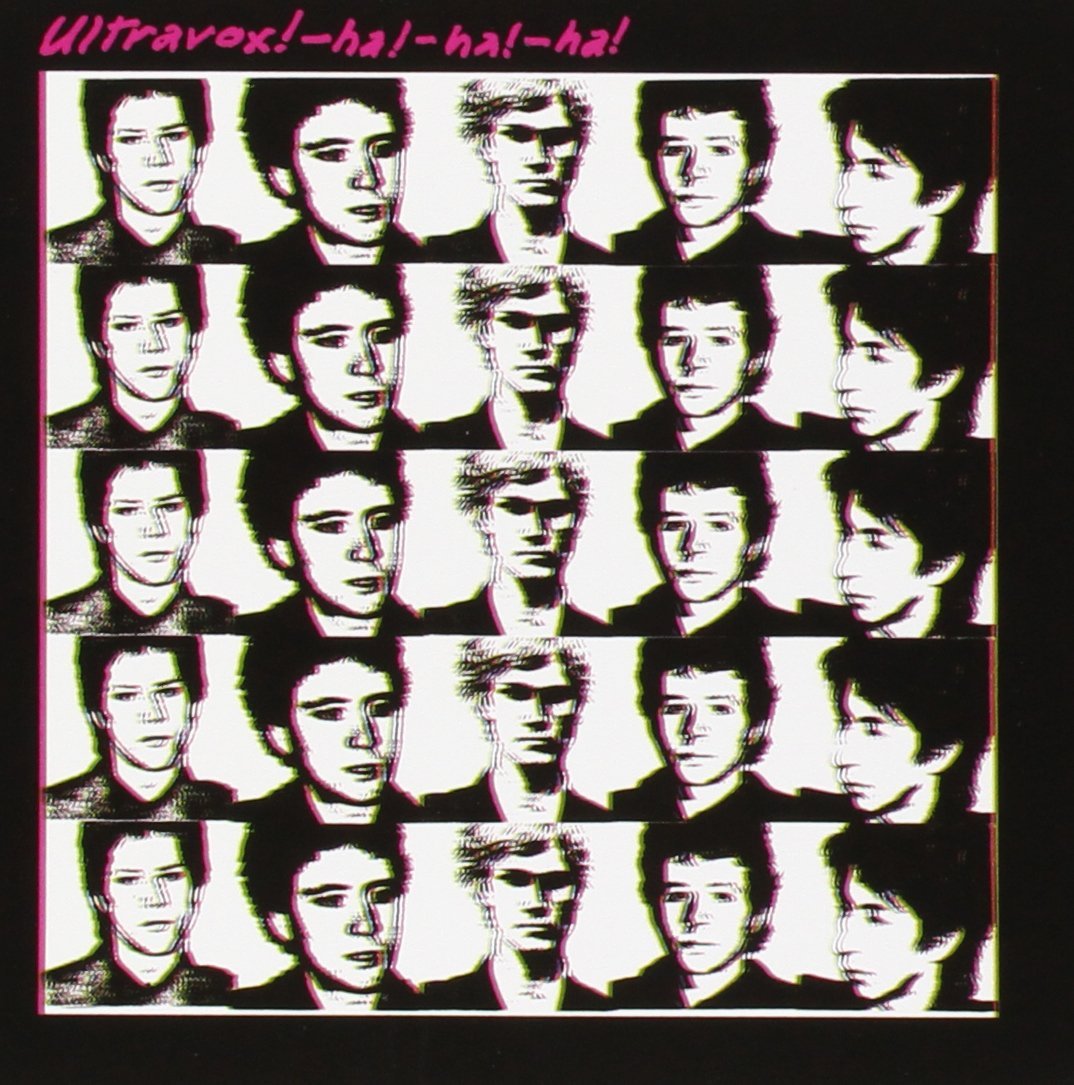 A mere six months later, Ha!-Ha!-Ha! was released. Much of the album has a punk feel to it, both in presentation, and lyrics, but the closing track, and second single, Hiroshima Mon Amour hints a future direction being one of the earliest songs to feature a drum machine, and with its subtle saxophone solo has a claim to be the birth of synthpop/new-wave. Quite aside from its place in history, it's a superb composition, and, for me, marks the start of the Ultravox I know and love.

However, despite the use of synth and viola, this was still manifestly more punk than prog. Billy Currie's playing in The Man Who Dies Every Day sought to demonstrate that electronic instruments could be as avante garde and aggressive as a guitar. It's a brilliant piece. 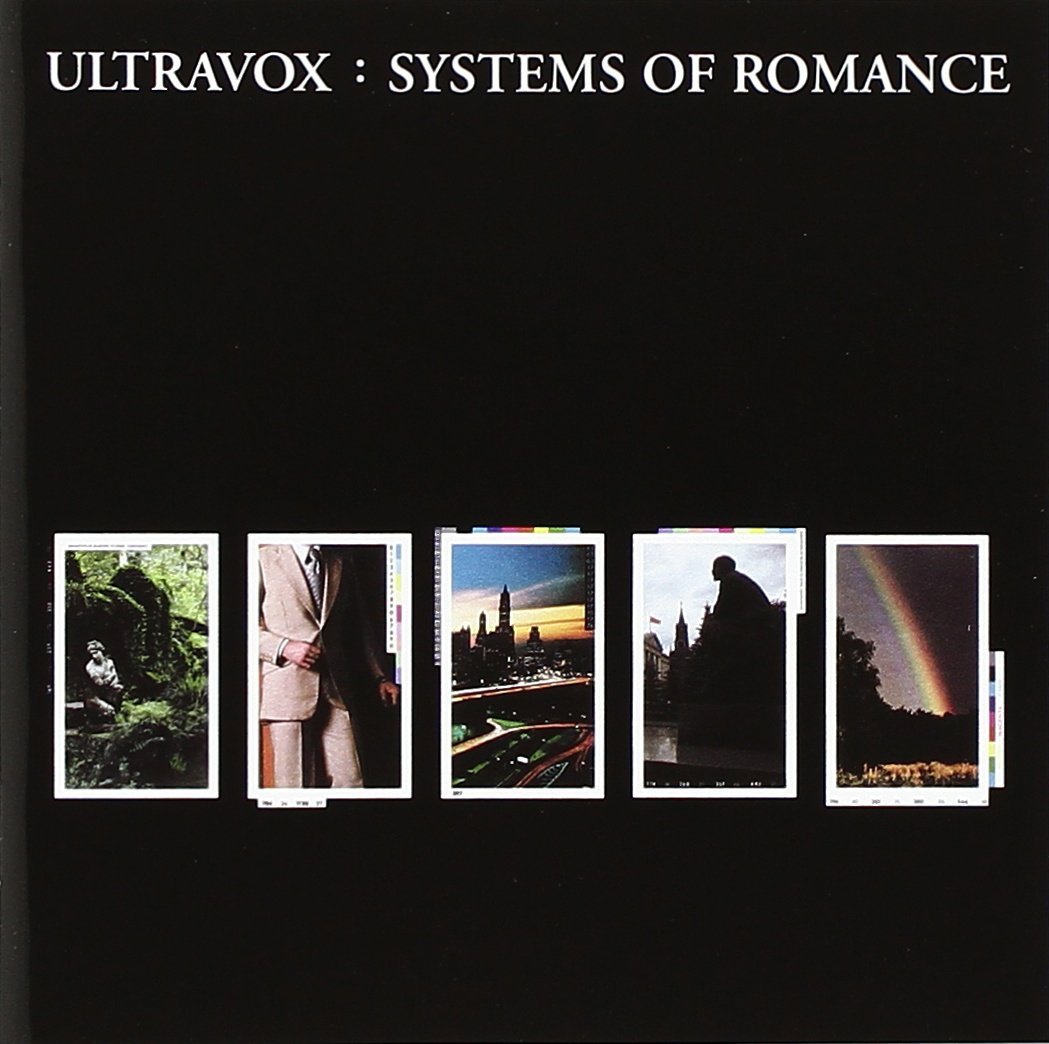 Systems of Romance, album number three, is arguably one of the most important albums in the history of electropop/synthpop. Making heavy use of the ARP Odyssey synthesiser, and the Roland TR-77 drum machine, purchased with the proceeds from the previous album, it was hugely influential on Gary Numan (with whom Billy Currie collaborated on The Pleasure Principle). The Quiet Men and Slow Motion could both be perfectly at home in a Tubeway Army set list. Throughout the album, in many places we see presages of later Ultravox, both in subject matter, lyrical style, and sound.

The album was produced in Cologne by Conny Plank, who had worked with Kraftwerk, the start of a productive partnership which bridges the John Foxx and Midge Ure era.

Lead singer John Foxx left the band after the third album. A tour of the US and Europe stretched relations with the other band members to the limit, and coupled with Island's decision to drop the band after three, frankly, commercially lacklustre albums, brought this phase of Ultravox to an end. With guitarist Robin Simon electing to stay in the USA bean the search for a singer/guitarist.

Through this relationship, Ultravox was reborn with the classic line of of Warren Cann, Chris Cross, Billie Currie and Midge Ure. 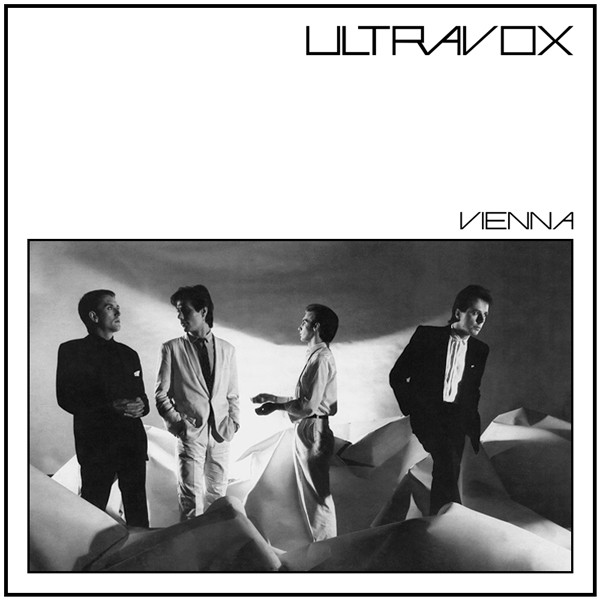 The band's first album with Midge Ure at the helm, Vienna, is a cracker, its opening track, Astradyne, a 7 minute instrumental featuring Billie Currie front and centre with astonishing synth and viola work, is a candidate from best Ultravox composition ever. The rest of the album is close to flawless. The singles from the album are outstanding, and the album tracks are superb too. Although best known for the single, bombastic and pompous, it's probably my least favourite on the album. 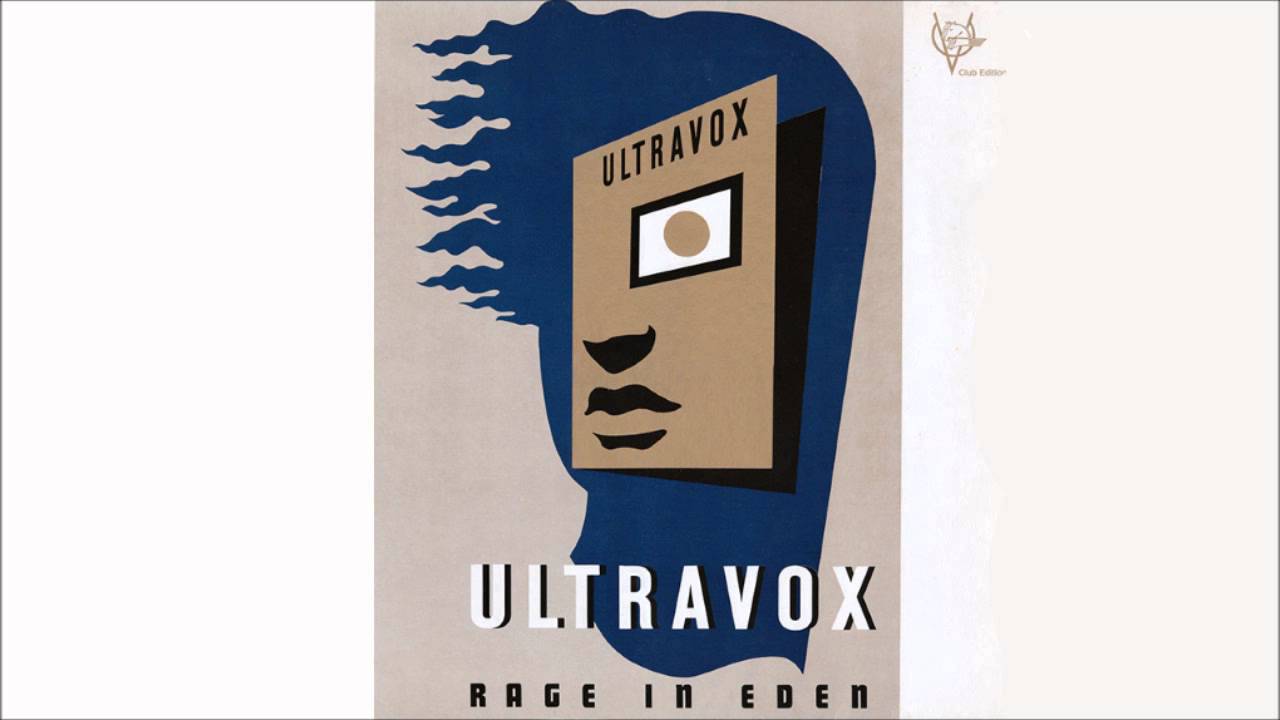 The follow-up album, Rage in Eden, was the third album to be produced by Conny Plank. Again, this is a fine effort. The opening track The Voice is one of the strongest songs, and the quality of the producing and recording makes this one of my go-to recordings for testing systems. Unlike Vienna, it's not near-perfect - both Rage in Eden and Stranger Within are a perhaps a little dull, but overall it's an excellent piece of work, and is frequently cited as a fans' favourite. It's equally appreciated by the band, with The Ascent mentioned by Billy Currie as his finest piece of violin playing. 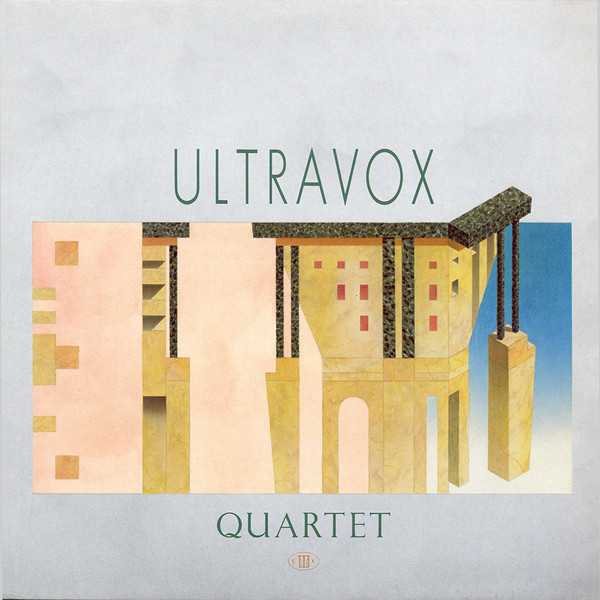 Quartet moves the band in a (even) more commercial direction. Produced by George Martin, it was Ultravox's most successful album in the USA. It features some superb tracks, perhaps only Cut and Run could count as weak, but in my mind the production errs just a little on the ultra-smooth, less edgy than earlier releases. I suspect had Conny Plank remained as producer, this could have been even better. That said, Hymn is a classic, with a fine synth solo harking back to the Köln years. Mine for Life is another favourite. 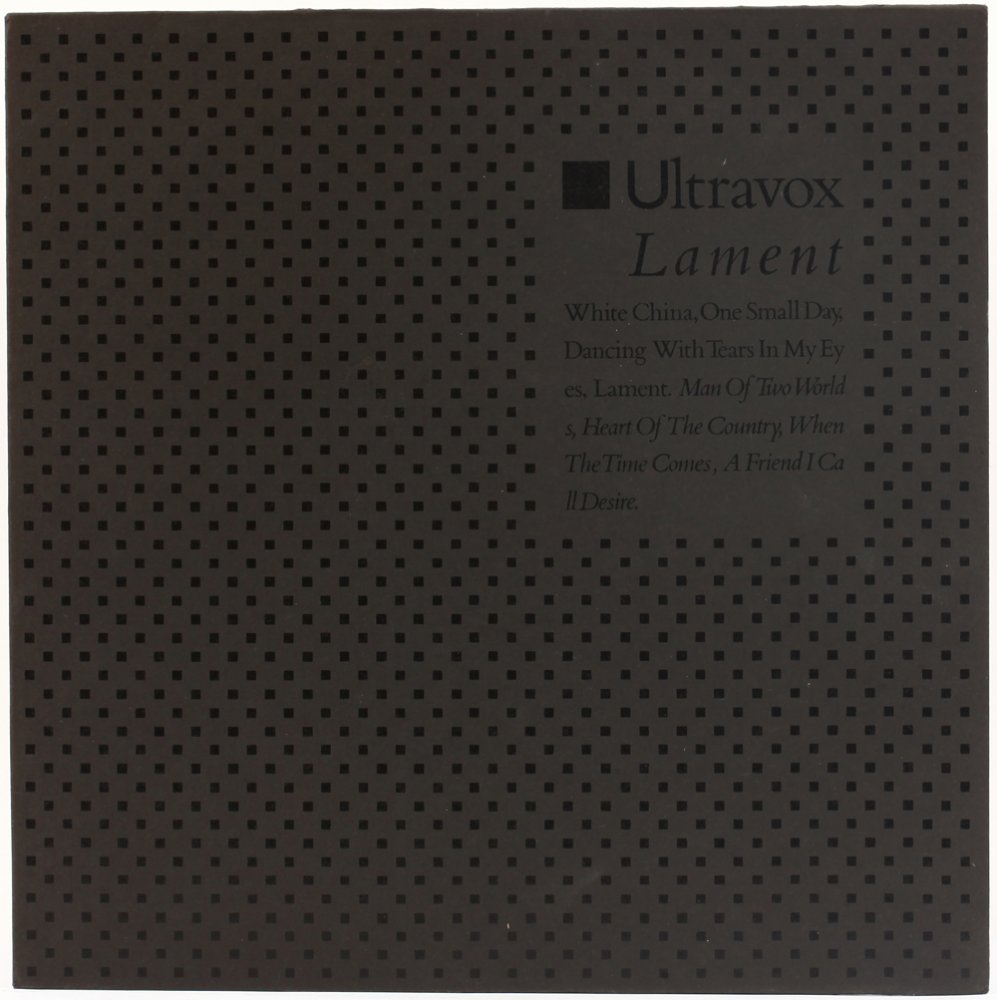 If Quartet marked a move away from synth pop, Lament completed it. The title track, amongst others, could be mistaken for Simple Minds. It's a worth a listen, but in my view, is the weakest album.

That said, the epic Dancing With Tears in My Eyes, whose video prophetically anticipated the Chernobyl disaster, two years later, remains one of my favourite songs. Open to interpretation - is it a metaphor for a dying relationship? Is it about nuclear war? I think it doesn't matter - it's a beautiful, haunting song. 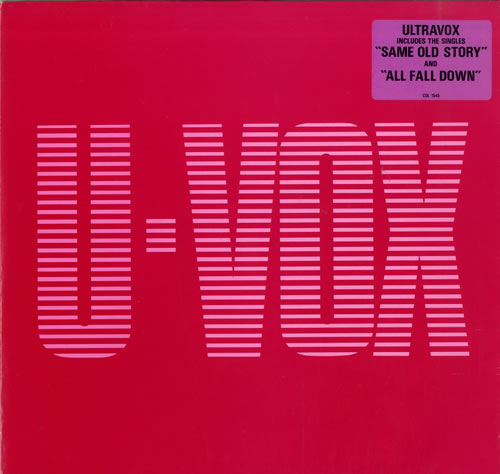 U-vox is an interesting album. With Warren Cann replaced by Big Country's Mark Brzezicki, it's a very different sound, almost uncecognisable. Amazingly, Conny Plank returns to the production desk, but with female vocals, a brass section, less synth, and celtic influences in All Fall Down, it has almost nothing in common with the earlier Köln projects. For me the jury is out in this one - sometimes I like it and sometimes I loathe it. It's certainly worth spending time with.

To round up, I think there are three fundamental reasons I love Ultravox. The first is the exceptional talent of Billy Currie - both on synth and violin/viola. On every album his brilliance shines through. His collaborative work is also worth exploring, as is his solo work. For me, Ultravox is a showcase for his talents and imagination.

The second is the lyrics - atmospheric, capturing the essence of, in particular, the 1980s. They stand up to scrutiny, and, although, as someone brought up in Lanarkshire, I am undoubtedly biassed, when delivered with Midge's Cambuslang diction they become extra special for me.

The third is the just the overall sound - particularly from Systems through until Quartet - it's a unique, captivating blend of vocals, intelligently crafted songs, a willingness to break beyond the three minute pop song, to push boundaries, yet still with memorable melodies. Mix in precise and captivating drum programming, a masterclass of analogue synth work, and modulated strings, and you have a unique, and winning combination.